Germany is the most influential, most central member of the European Union, and German the most widely spoken native language within that dynamic and important entity.

Despite its reputation for difficulty, German is in many ways more closely related to English than most other languages. It provides an access to studies in philosophy, history, music, literature, and many other academic fields. Mastery of German can be important for those whose interest in business focuses on Europe. It is a language spoken not only in Germany, Austria, and Switzerland, but also in neighboring countries, especially to the east, where it has a tradition as a lingua franca.

Learning German provides access to many fields of study and activity. Though to some it is the language of a parent or grandparent, German has become a language of choice for many, valued for its expressive and conceptual qualities.

The David J. Parent Scholarship was established in 1998 by his friends and family. It recognizes a student studying a foreign language, with preference given to applicants studying German.

German teacher education major Mando Gjinollari has won first place in the Friedrich Dürrenmatt Essay Contest put on by the Swiss Consulate in Chicago. Mando’s essay explored the relevance of the work and ideas of Swiss playwright and writer Friedrich Dürrenmatt for our contemporary world. Her prize includes a $500 gift certificate, and her essay

Languages, Literatures, and Cultures would like to welcome Dr. Jonathan Seelye Martin to the faculty. 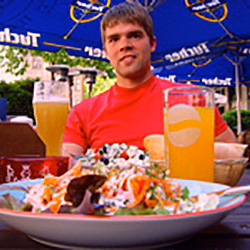 "The coursework I had done with the German professors at Illinois State had given me a tremendous advantage in rapidly being able to speak and understand the language fluently and hence concentrate on learning more about the country’s culture."