Portuguese is a newer program in the Department of Languages, Literatures, and Cultures. We currently do not offer a major or minor.

However, through coursework students can satisfy their language requirement in Portuguese, and independent studies are sometimes available for further study. Beginning Portuguese assumes no language background either in Portuguese or in another language, such as Spanish.

So, what are you waiting for? Come and give us a try! Muito obrigado!

Please note this option for students interested in Portuguese, a language spoken in Portugal, Brazil, Angola, Mozambique, Cape Verde, Guinea-Bissau, and São Tomé and Príncipe, the United States, and other former Portuguese colonies.

We are currently not offering POR 111 and have designed POR 112 to include an accelerated review of beginning materials at the beginning of the course.No language experience with Portuguese, or any other language, is required. All who are interested are welcome! We hope to have sufficient enrollments in POR 115 in the fall, but if we do not, the professor is willing to teach it as an independent study. If students have questions about Portuguese offerings and whether or not this would be a good fit, they can contact Dr. Benjamin Schmeiser, Director of the Portuguese Program.

Brazil is part of BRIC (Brazil, Russia, India, China), a group of nations that has shown newly advanced economic development. If you do have a background in Spanish, Portuguese and Spanish share over 80 percent of the same verbs. The Portuguese-speaking world is incredibly diverse, ranging from Brazil (in the Americas), Portugal (Europe), Macao in China and East Timor (Asia), as well as many countries, for example Mozambique and Angola, in Africa.

Guidance pays off for student in Portuguese classes

An update from Alex Gargona, an international business and marketing major with a minor in Spanish. Alex took Portuguese classes offered through the Department of Languages, Literatures, and Cultures.

Student Abbey Kuntz spooks about her trip to Brazil that came about because of her connection to an international student.

Illinois State’s latest crop of visiting students from Brazil are digging deep into the science of horticulture this summer through an internship at the University’s outdoor laboratory. 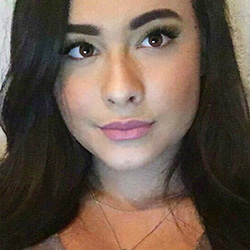 "I decided to take Portuguese because I wanted to further enforce my native language as well as practice the interactions with others who were passionate about it as well. I am really glad that I decided to take this course; it did a lot for me and the class was very enjoyable. I like sharing my culture and interacting with other people."