Learn more about the exciting project of transcription and translation of medieval documents by Latin students in Dr. Jasper's class.

Arguably no other language has had more influence on modern Western culture than Latin. Latin was the language of literature, philosophy, diplomacy, law, science, history, and theology for centuries in Europe. Latin remains the official language of the Vatican to this day, and it continues to be spoken in living Latin programs in both the U.S. and abroad.

There are so many reasons to study Latin. Classical studies reveal the roots of our own modern American culture. And why not read about the triumph of Caesar in Gaul, the conquest of Italy recounted by Livy, or the eruption of Vesuvius described by Pliny the Younger in the original Latin? Because Latin was used throughout Europe as a scholarly language, even if you are not a student of history or literature, learning Latin can help grow your English vocabulary; roughly half of the English language is borrowed from Latin. Knowledge of Latin terms would be also indispensable for anyone pursing study in the fields of law, medicine, and the sciences.

Courses taken in Italy may count toward completion of the Classical Studies minor. Pre-approved year-round study abroad programs are provided by the Lorenzo de' Medici Institute.  Locations of study include Rome, Florence, and Tuscania. The ISU in Orvieto summer program is also available to students pursuing a Classical Studies minor.

Learn more about the benefits of studying this language from the National Committee for Latin and Greek.

Allison Madura talks about her choice to study Latin, and her work on an illustrated manuscript form Milner Library.

Students enthusiastically connect the old to the new through learning Latin

A visit to Kathryn Jasper's class shows excitement is alive and well for the language of Latin.

Professor makes history and language come alive outside of classroom 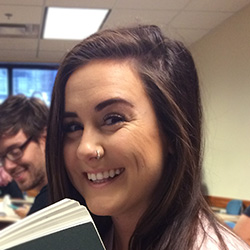 "The classes are small and personal, and the professors are always willing to help as much as possible. The material I have learned in Latin and classes pertaining to the Classical Studies minor have been very useful in some of my history and political science classes and have given me a better understanding of the course material."